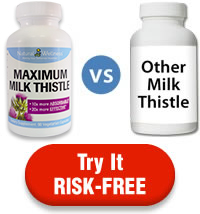 Maximum Milk Thistle's® daily recommended dosage contains 240 mg of silybin, the most beneficial active ingredient in milk thistle. The chart below will show how many capsules of each competitor’s product are needed to equal the effectiveness of the 240 mg of silybin contained in just 3 capsules of Maximum Milk Thistle®, taken daily. It will clearly demonstrate how potent, convenient and cost effective Maximum Milk Thistle® is as compared to its competitors. Keep in mind that UltraThistle® contains even more silybin - 360 mg - so you would need even more of the competitor’s product to equal the strength of UltraThistle®

* Based upon 2018 regular pricing from representative product sites on the Internet.
† Comparison based on 240 mg of silybin in Maximum Milk Thistle® vs. 240 mg of milk thistle standardized to 80% silymarin.