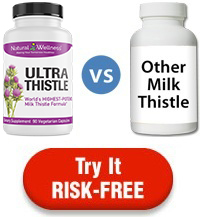 * Based upon 2018 regular pricing from representative product sites on the Internet.
†Comparison based on 360 mg of silybin in UltraThistle® vs. 360 mg of milk thistle standardized to 80% silymarin.